Get Close to the Biggest Animals on Earth

Whale watching in Dana Point is more than spectacular—it’s world class. Officially trademarked as the “Dolphin & Whale Watching Capital of the World,” we have the best year-round whale watching, including the greatest concentration of blue whales and dolphins on earth.

From Dana Point Harbor, gray whales can be seen just seconds away by boat, and nearby are gigantic and gentle blue whales, fearsome killer whales and marine life in their natural habitat that will have you saying “Ooooh” and “Aaah.” It’s a cliche, but it’s true. We all but guarantee you’ll reach storage capacity on your smartphone thanks to all the photos and videos you’ll take during a whale watching tour in Dana Point.

Where to Go Whale Watching in Dana Point

Whale Watching at the Ocean Institute

With a focus on education, the Ocean Institute’s marine educators take visitors of all ages out on the R/V Sea Explorer in search of whales, dolphins and sea lions. Learn about the ocean from top to bottom while searching for some of the world’s largest and smallest creatures during the 2.5-hour long whale watching adventure in Dana Point. The Ocean Institute provides the only whale watching in Dana Point that allows your family to be scientists for the day. 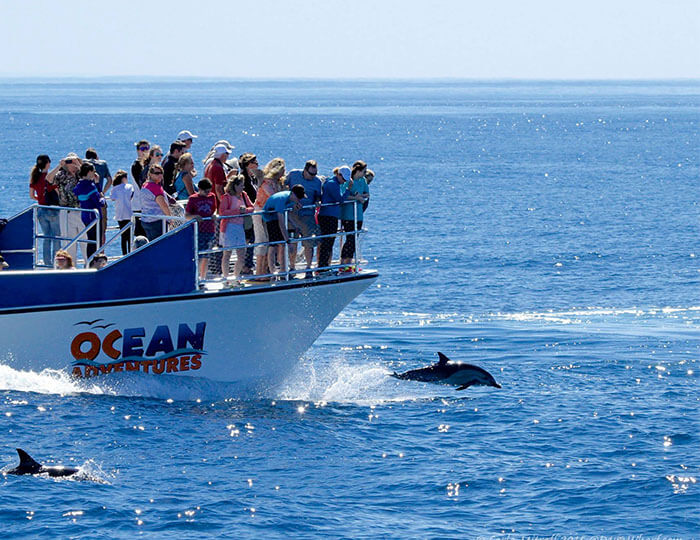 Experience the world’s only Eye-to-Eye Underwater Viewing Pods while whale watching in Dana Point. Aboard Captain Dave’s high-tech Sailing Catamaran, you can see and hear whales and dolphins up close in their own underwater environment. Captain Dave, an award-winning filmmaker and author, has also outfitted his vessel with three Eye-Spy Dolphin Nets and micro-museum. With less than 50 people on the boat during every voyage, the 2.5-hour tours are never crowded, giving everyone a cushioned place to sit with plenty of elbow room. Captain Dave also offers special whale watching tours in Dana Point, such as small group trips on a fast and fun zodiac catamaran. Faster speed means more time enjoying the whales and dolphins! 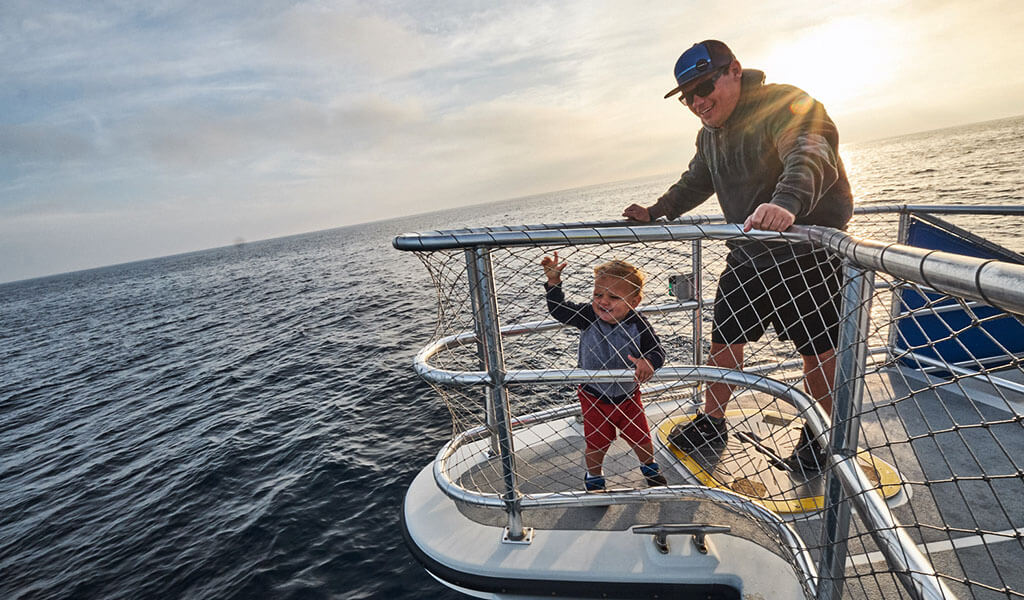 Gray whale season extends from November through April. The gray whale makes one of the longest of all mammalian migrations, averaging 10,000-14,000 miles through the Pacific Ocean towards Mexico. Of course, this means they pass right through Dana Point, making for incredible whale watching. Blue whale season lasts roughly from May through November. Seeing a blue whale while whale watching in Dana Point is a rare treat. The largest mammal on earth, blue whales can reach over 100 feet long and weigh over 100 tons. They make appearances just off the coast in Dana Point. Be sure to have your camera ready to catch an epic shot of their tails coming out of the water (lobtailing).

Watch Whales From Your Hotel Room

Find the perfect place to stay in Dana Point.